Shot in the Arm

Pulling in for my first Covid-19 vaccine shot, I found a jam packed parking lot and a seemingly endless line of people spilling out of the abandoned department store turned vaccination center. Getting out of my car, I stopped, scanning the sidewalk. The line wasn’t just long, it was growing as other confused hopefuls showed up and fell in place. 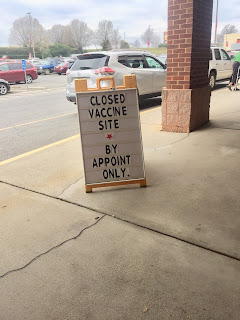 At first I thought, Nope. No way, I’m out of here.

But I was on the list, didn’t want to risk getting off the list, and well, I’d better hurry because it was only getting longer.

A year ago I would have never believed this was possible. At work, when they kicked us out of the office, I thought it would blow over after a few days, a week. But as my desk became something akin to a time capsule, as a year looks to become a year and a half, well, like everyone, I’ve adapted.

This was is not a scene from a dystopian movie. This was real. This was now.

My shoulders slumping, I fell in line, realizing there was no way on earth would make it back before my lunch hour was up. I sent my boss a message. She said to stay. Get the shot.

For five minutes I sulked. Ten. How did this happen? That I would have to come out and wait here, with these masked people. Not for a massive sale on a TV or computer or video game. But for a shot.

But as our line stepped forward, inching closer, things changed. Yes, we were waiting for a shot. We were waiting.

And it dawned on me, right there in that amusement park line. We. Not us. Not them. But we. In that line, money didn’t matter. Race didn’t matter. Class, gender, employment status or past. Only health. Covid doesn’t discriminate. Why should we? And so as BMW’s pulled up beside rusted out pickup trucks, our line continued to inch for the door. We, a herd of hopefuls, headed for the door.

Yes, it was dystopian—the temperature gun deciding my fate before I stood under florescent lights in some makeshift vaccine center where an old department store used to be. Yes, it was still strange, even after a year of everyone wearing masks, distancing, fighting to the death over politics online.

There were smiles, people making the best of it. Adapting. People nodding in agreement with strangers. Strangers they never would have met had it not been for this line. They laughed nervously. They talked about grandbabies, children, elderly relatives, family, friends, hopes and dreams and expectations. We were all there for the same reason. To live. To be healthy and enjoy those closest to us.

As the line moved, I spoke with a woman about her retirement and where she wanted to travel. Another few steps where two men talked cars. Stepping again as a beaming older lady was worried about her 99 year old mother. I told her how I worried for my grandmother, who’s 95 and not doing so great. I found this lady again after our shots, where we talked about our arms, the soreness, when we’d come back for our second shot. She was smiling, I could tell by her eyes. She was smiling like she earned it. And I didn’t know this lady at all, what she thought of the world and who she voted for, only that we’d spent two hours in line together and we’d conquered that first shot. Only that her eyes were crinkled with her smile. And you know what? I forgot all about the abandoned store, the dystopian scene around us, the masks and the world around me. Because I was smiling too.

Until I walked outside and realized I’d completely forgotten where I parked.