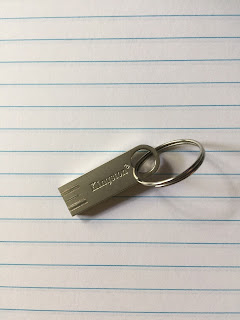 So many times I’ve stared at a string of blurry slop in a word document, eyes squinting, scratching my head, all while thinking, Wow, this is really, really terrible. Maybe I’ll try to push through the creeping doubt, tune it out and plug away. But the doubt grows, screaming in my ear until it bears down on me. I question each word, every sentence, what I’m trying to do in the first place until I say forget it. I go to close the document, ball up the page or burn the entire thing to the ground, because what’s the use?

But then I don’t.

I don’t scrap it but save it. Because whatever idea or burst that got me going, grabbed my attention long enough to sit me down and get me writing—be it weird, different, quirky, a failed attempt to be original—must contain something worth keeping. And so I keep it for later.

Recently I lost a thumb drive. I think I left it at the library but I haven’t called yet called to check so I can’t be sure. On the drive are several novels, well, half novels, will-never-be-novels, a few can you really call this a novel? novels. Trust me, whoever finds that drive will gladly hand it back after one look at the terrible poetry or corny raps, the head-hopping short stories and tense-tangled flash fiction. Just thinking about it makes me cringe. There is some truly horrible writing to be found.

Of course, I know now that horrible writing is okay. At least I hope it is for my own sake because I’ve never been afraid to let it rip on that first draft. Or second or third. To me, it’s the best thing about writing—when I’m all but consumed by an idea, character, or plot, when I get so wrapped up in a story it takes me a moment or two to come out of its spell. It’s why I bother at all.

So hang on to it. Save that burst of creativity that comes with those characters you got to know so well. Save it and then go back and tinker. Hop around those discarded treasures. Go from one doc to another until something clicks and boom—whoa! That makes sense! It’s a magical moment, when those chapters actually start to take shape, come together and resemble a story. It’s sometimes a bit hard to believe, how those letters formed words that formed sentences that spun out a whole book. Crazy.

Now, fixing up madman scrawl isn’t the only useful thing about saving even your smelliest word garbage. So many times I’ve gone back to that lost thumb drive for inspiration, or a laugh, or in other cases, simply to cannibalize.

I’ve taken parts, pieces of nothing—bits of word prompts, journal entries, midnight bursts of inspiration—then mixed and mashed them together and gotten lucky. Maybe I came up with a new character entirely. Maybe a piece from my childhood found its way into a book. Maybe I just liked the way the chills hit my arms when I wrote about my grandfather, the jolt of fear that stamped my memory from when I was a little kid and got lost in the woods, wandered off in a department store, a park (I wandered a lot). Maybe I needed the right emotion to jumpstart my story.

So I steal from myself. And that’s fine. Because one day’s jumble of nothing can be another day’s Aha moment. And as long as it gets you where you need to be, who cares how you got there? Nobody needs to know it came from a tried and failed novel? Well, unless you write a blog post about it.

This is no guarantee. It won’t always happen. I’ve written more than a few clunkers, stuff I go back and turn sideways as I scratch my head and try to decipher whatever it was I was thinking that day. Lots of times the trash still stinks. But other times, this composting of thoughts and ideas has produced. I’ve got four books coming out with Immortal Works in 2021. Three more lined up for 2022. And this didn’t happen overnight, it began years ago, with nothing more than a few ideas and a willingness to try and fail and then do it all over again.

So write, scrawl, get fearless and go to town. Worst case scenario you write something that never sees the light of day. But you’ll be a better writer for it. And who knows, you might hit your stride the first go around. You might not. But how many people talk about writing a book? Lots. Everyone has an idea, a story, but they never get around to writing it because they don’t have the time, don’t know how to write, don’t know where to start.

You start at the beginning. Or the end. Or the middle. You simply grab a pen, find a keyboard, and you take a crack at it. You relive a moment. You tap into your soul, something that moves you, be it failure or fortunes. You let yourself go and find a character’s love, fears, hopes and dreams. Why be afraid to try? No one has to see it. It can be your own little secret.

Until you lose your thumb drive.