With #pitmad tomorrow I thought I'd post a scene from my entry. This one's called No Love Songs, here's a random scene where Myles learns he's not the only one with problems at home... 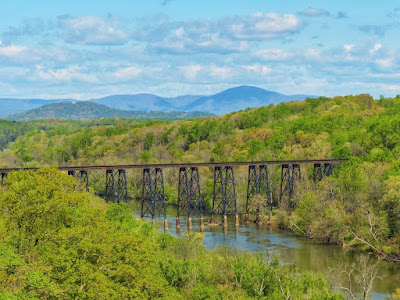 We hit the trails along the backend of the park, hiking down to the ledge, where the rocks sit on a cliff overlooking downtown. Before Mal, I’d been coming to River Run Park all my life and had no idea of all the trails and overlooks until she brought me down there to write songs.

The first time I watched her leap onto the rock, worn smooth by all the hands and feet and paint over the years, I lunged after her to pull her back to safety—seeing how there’s nothing but a few hundred feet of fall to the river. It still makes my heart skip when she gets up there and stands with her arms spread apart, like someone about to take a swan dive to their death, but at least I’ll sit with her.

Even with the scattered trash, the beer bottles and cigar wrappers, cigarette butts and shards of styrofoam, it’s a beautiful spot. Great for inspiration. A train trestle stretches across the small canyon, braced against the smeary blood orange horizon of the setting sun. On occasion, when we hear a train rumbling in, Mal grabs my hand and squeezes tight, squealing like a little girl. But for now, it’s all quiet.

“You doing okay?” she asks suddenly, pulling me back in from my thoughts.

She looks me over. “Is Hank being… you know? All Hank-ish?”

She’s the only one who knows anything about my life at home. Not even Noah knows how it is with Hank. I roll my neck, blow it off. “Yeah, it’s fine.”

Mal turns to the trestle, patient as she waits for me to open up and tell her about Hank slamming me into the refrigerator. Ever since the day he moved in, he was after me to “man up”.  And it wasn’t long before he decided part of “manning up” was to lash my back with his belt.

A gentle swoosh of traffic across the river. I don’t want to talk about Hank today, or anything really.

Mal’s got a scab near her left knee, peeking out from the hole in her favorite jeans. Her bronze skin holds the evening sun, contrasting with her white V-neck. She cranes her neck as she looks out to the quiet. She’s the only person I’ve ever known who can wear a sunset—its dwindling warmth finding her cheeks, casting a shine in her eyes. The water is calm and there’s just a tiny breeze hitting our faces. She meditates for a few seconds before she pulls out her notepad.

We get to work. We fix up her stupid Blond Hair song and I’m still messing with her about it, teasing and laughing when Mal gets quiet. She sets the pad down and gazes off. Something about the way she does it hits me and I realize, as we’re up there above the river and the noise, that this song isn’t a joke to her. It means something. And sometimes I get so wrapped up in my own issues I forget her life isn’t so perfect either.

She told me that once, right here at this favorite place of ours. I was mad at Hank about something and I blew her off. “No offense, Mal, but you don’t understand. Your family is perfect.”

She'd turned and glared at me, her lips parting. “Is that what you think?”

I shrugged. “I mean, yeah. It’s better than what I’ve got,” I said, as though we’d entered a competition to see who has the most messed up family.

Another glance out to the trestle. When she looked at me again her eyes were dark and piercing. “Wrong.”

The sharpness in her tone popped my little pity bubble. With my full attention, she bit her lip, still shaking her head as she turned to me, squinting against the evening sun. “Myles. Do you know how much shit my dad takes on a daily basis?”

“Well, let me help you out there. He takes it from the world. From his patients. From everyone who looks at him or hears his accent and assumes he’s going to plant a freaking bomb in a mall or on a plane.

She held her palm up to me. “Seriously, he’s got to be the nicest person in the world, even after what he’s seen back home, you know? It’s crazy. How he came here from Egypt, to America, looking for freedom and prosperity,” she said with air quotes.

“He went to medical school, stayed here to practice medicine. You know, to help people. And what’s the thanks he gets? They call him a terrorist at a baseball game.” She aims a sharp stare at me, a scathing smile, nodding. “Yep. True story. They ask if he has a flying carpet. They treat him like a criminal even after he goes and calls himself John.”

Her voice was defiant, daring me to go against her. Hurt filled the gaps between her breaths. “Look, you may think I live in some nice suburban house and everything is great, but, it’s not. My mom? No better for her. Her family hated my dad because of some religious sect, or something I don’t even fully comprehend. I mean, we’re not even religious, probably because of that. My grandparents, they basically disowned her. For marrying a doctor, for god’s sake.”

She looked off, contemplating. I let her stew, throw some rocks over the cliff until I realized she wasn’t finished. “Oh, what about Charley, you ask? The boy wonder?” She glared at me. “Jihadi Boy—it’s what they call him at school. Did you know that, Myles? Can you believe that? Private school shits. He was going to rap a song about, you know, as a joke. I told him if he did I would wage my own personal jihad on him.”

She took a huge breath, as though sorting out the wreckage of thoughts and words scattered all over the place. I went to throw a rock when I stopped. “And what about you, Mal?”

She turned, stared me down. “I guess I got off easy. Oh sure, the girls just love my exotic look. The blonde girls rave about my olive skin and my like, totally cool hair.” She tossed a strand of hair and fake giggled.

I looked away. “Your hair is cool.”

Her voiced softened. “I could never be one of them, not that I want to be.”

And just like now, she gazed out to the trestle, hoping for a train to come and take her thoughts away. I think of how she zones out, gets quiet. How she feels guilty for her academic successes, like she hasn’t earned it like her father. About the band, she feels like a phony because she lives in suburbia but wants play warehouses and be hardcore.

The thing is, Mal’s family story is hardcore. Her dad is the bravest man I’ve ever met. And she’s got to see that, see how strong she is because of who she is. Maybe I should tell her that more often.