Release Day - The Girl in My Treehouse 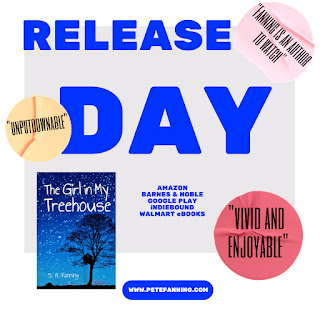 Tomorrow is the day. THE GIRL IN MY TREEHOUSE is set to go out to the world!

Only one summer sits between Matt Crosby and high school, and it feels like his middle school friends are leaving him behind. But when a comet of a girl moves in up the street, Matt discovers a side of himself that’s dying to break free and try something new.Lia doesn’t see the Matt Crosby everyone else sees: the shy, awkward kid with the stammer, but instead a friend. With Lia, the long, summer days are action-packed with wonder. From scavenger hunts at the grocery store to midnight canoeing under the moon at Preacher Higgins’ pond. Or maybe just staring at the sky and feeling completely comfortable in his own skin. But in a small town like Maycomb, a girl like Lia doesn’t go unnoticed.Matt’s old friends make jokes about the way Lia dresses, her hair, even her darker skin. As a correctional officer, Matt’s father has already run into Lia’s mother at the jail. But it isn’t until Matt discovers Lia sleeping in his treehouse that he realizes things might be worse for her than she’s letting on. Having found the courage to follow his heart instead of his friends, Matt realizes that somewhere along the way, he became the Matt Crosby Lia saw all along.

It's a book that began as a 500 word writer’s prompt. But I blew past that as Lia, my main character’s crush, quickly became a fascinating character to write. She pushed Matt outside his comfort zone, charmed him, tormented him, and ultimately changed his life.

And while Matt was changing, learning how to stand up for himself, to his friends, his dad, his little town was changing as well. Mom and Pop stores are closing down, giving way to the big box stores and chains. An old preacher is talking crazy, scaring his congregation with sermons about acceptance. And Matt's father is changing as well, learning that his son is anything but a younger version of himself.

I set out to do something different with this book. And while it's not the first coming of age, small town story, I do feel like it's got a special feel to it. I really enjoyed writing it this book, I hope it shows.